What is the Billboard Effect?

Billboards, in out-of-home marketing, are aimed to capture the audience’s attention and enable quick dissipation of information so as to influence their future purchase behaviour. They are not placed near the point of sale and yet manage to convert people into brand consumers. In the hotel industry, the billboard effect refers to the benefit in direct room sales that accommodation providers receive as a result of marketing on third-party websites such as Online Travel Agents (OTA) and Meta-Search Engines. Exposure on the OTA website does not just result in reservations through that channel, but also leads prospective guests to a hotel direct booking channels such as their website or telephone.

In 2009, an Assistant Professor at Cornell University, Chris Anderson, released a research that acknowledged the effect of listing on an OTA had on Non-OTA bookings. For the purposes of the research, four properties of JHM Hotels USA were monitored and the results were quite astounding.

It was noticed that every time any of the four hotel properties came up on the first page of Expedia, there was a significant rise in hotel reservations through the property’s own channels. The research revealed that merely listing on an OTA, boosted direct room sales for a hotel by up to 26% and we are not even taking into account the higher OTA revenues.

It seemed that merely appearing on the top results of an OTA, generated a response directly on your website. This phenomenon was aptly dubbed as the billboard effect and excited every hotel marketing manager worth his salt.

In 2011, another much more detailed study was conducted by Chris Anderson. This time the subject of study was 1,720 reservations of the InterContinental Hotels. The reservations were for the month of June, July and August over a time frame of 3 years – 2008, 2009 and 2010.

The results were truly astounding. The benefits of listing on an OTA seemed to outdo the revenue lost in commissions. The billboard effect turned Expedia into a search engine marketing tool for hotel revenue and marketing managers.

Before you switch the tab on your browser and start Googling “List of best OTAs”, take a breath and finish reading the article.

The last study on the billboard effect was done over three years ago. However, in today’s fast-paced business environment a LOT can change in three years.

So, what has changed since 2011 that is diminishing the billboard effect that was experienced by hotel brands just three years back? Consumer behaviour.

During this time, not only have other OTAs come up, but brand awareness for existing ones like Expedia, MakeMyTrip, GoIbibo and Yatra observed tremendous growth. The ease of locating hotels by the destination in one go was an obvious boosting factor. But what truly cemented consumers’ trust in OTAs were the discounting tactics employed by them. This way today’s consumer has been trained to understand that OTAs not only provide ease of booking, but also provide the best rates. Even though an offer of better value, not necessarily meaning a cheaper room but better-clubbed facilities and amenities,  may be available on the hotel’s website, the consumer perception forces them to believe otherwise.

Another important aspect that needs to be addressed here is the growing acceptance of mobile apps. Mobile apps have proved to be a game changer in a lot of industries and tourism happens to be one of them.  In January 2014, a study by ComScore revealed that in the US, of the total internet time more than half was spent was on apps rather than the browser. Some of the digital marketing agency might help you to drive more sales and traffic to your site.

This has led to an environment where users find it more appealing to book from an OTA rather than from the hotels website.

So, What is the Future of the Billboard Effect?

Oh Yes!  It does still exist and is not going away anytime soon.

In fact, our conversations with several hotel revenue managers revealed that they do experience the benefits of good OTA visibility in direct revenue generation even today. As the delivery methods change from desktop to mobiles, consumer behaviour might also see a change. Maybe the billboard effect will manifest as direct phone calls to hotels after viewing it in the app.

Moreover, the adoption of new technology has essentially created more avenues to connect with the target audience and convert them into direct sales. With the gaining popularity of meta-search engines, hotels have an opportunity to lead guests to their own booking engines. Other avenues that hold a lot of potential to increase online visibility and direct sales revenue are the local listing services such as Google Business and Four Square along with Search Engine Marketing.

Hotels understand that a well-designed device-adaptive websites and booking engines, when combined with well-managed channel strategy will be able to replicate the same booking experience as the OTAs are providing today.

Listing on OTAs is Not the Problem, Managing the Listings Is

Not listing on an OTA is not an option, but to maximize revenues, hotels should be using every weapon in their arsenal to increase direct reservations from the hotel’s own website.

The first task that needs to be accomplished for this is to rank higher on an OTA. For this, one needs to sell more rooms through the portal and merely listing is not enough.

But wait a second. Wasn’t the whole point to direct all the traffic to the hotel’s website to increase direct room sales?

Nope. The point here is to secure as many direct room sales against the room nights sold by the OTAs so as to maximize direct sales and justify the investment being made in terms of commission to OTAs.

So, coming back to selling more rooms on the OTAs, ad hoc allocation of inventory is not going to solve our purpose. You need to expose room inventory in real time. It is essential that your listings on all OTAs are constantly updated with the latest data from your hotel. This will allow your hotel to show up much more prominently when users search for hotels in a particular destination on OTAs.

But wait again. That’s a lot of work to be taken care of. The room availability keeps changing for future dates, reservations needs to be managed from all online channels, travel agents and direct bookings, loyalty programs galore, constantly changing pricing strategies… What about the time, energy and resources that would need to be put in? Why doesn’t any strategy ease up the workload?

This one does. Say hello to Djubo.

Djubo is a ‘360-degree Hotel Sales Platform’ that provides all the benefits of a Centralized Reservation System Hotel with a fully integrated Online Channel Manager.

Djubo allows you to link all your online booking channels with your hotel’s reservation system and merges reservation from every channel seamlessly into the hotel’s actual booking chart. With Djubo, you will stay updated with the status of room availability in an instant, thereby allowing you to make allocation of room inventory a breeze. When you are able to allocate room inventory in real time to the OTAs, the bookings through OTAs themselves will show an increase. Once you start getting business from the OTAs, your hotel will start appearing on the top results of OTAs. Once you start appearing at the top, you are ready to welcome the billboard effect and the direct sales it will provide. But that’s only half the problem solved.

Next, one needs to analyze the revenue generation from each travel portal to determine whether the money being lost on commissions is worth it or not. Djubo to the rescue again. Djubo provides a powerful analytics engine that will help you determine exactly that. The insightful analytics will not only allow you to understand how much of a billboard effect you are seeing from an OTA, but also allow you to allocate more room inventory to OTAs that are able to distribute it more efficiently and at a lower cost to your hotel.

That’s not all; Djubo comes bunched with a range of tools that simplify revenue management. Features allow for automated payment follow-ups, a cloud-based 24×7 sales desk to manage revenues even on the go and superior front office coordination among many others. Have a look at all the features here.

Our diligent little hard worker leaves you with enough time to take care of the next order of business. Marketing yourselves right on the OTAs.

If there is one thing that the Hotel’s own is the experience. Make sure you are selling your experience be it on the OTAs, the meta-search engines or for that matter your own website. Make sure that users are enticed to visit your website at every digital touchpoint to know more about this experience.

So rather than debating the concept of billboard effects based on someone else’s data, work on your own data with Djubo to identify the most effective marketing channels and strategies. 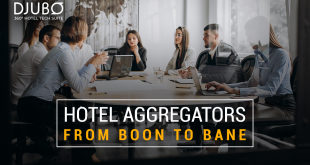